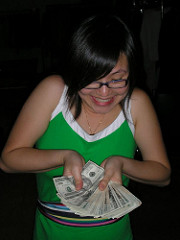 After much desperation and frustration (for some undisclosed reason), finally I got hold of Microsoft Money 2007, Home & Business Edition. This is because the financial software I was currently using was Microsoft Money 2004 Deluxe, I guess an upgrade after 3 years will be great. Or so it seems…

Installation was… very quick, despite my Windows XP Professional SP2 system was running under VMware. There was no message whatsoever while installing, weird. True, none of the “Copying files to…” or “Preparing installation script…” messages. It seems that Microsoft actually expects Money 2007 installation to be superfast, and this is completely true. I just hope Microsoft won’t hide the installation messages on the next version of Visual Studio or SQL Server setup, or we’ll get very frustrated, hahaha… 😉

The first impression is nice. Definitely much better interface than Money 2004, and it’s not slow as I had imagined. The conversion process for the Money 2004 data file was fast, only about 1 minute. The homepage doesn’t change much. Especially the charts, which seems to get no improvement whatsoever. Shame on you, Microsoft. 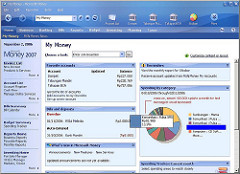 This is the home page. Shows some stuff. Note that this homepage is highly customizable. Rumor is that Quicken 2007 has even much better home page. 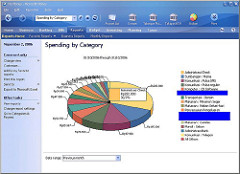 One of the most useful reports. It shows how much you spend on each category (for lack of better description, heheh…) 😉 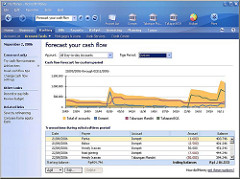 This view is interesting. It shows your past financial history as well as forecasting your future financial state. I find it’s more eye candy than useful. But it’s actually very useful to predict your spending, although I’ve never been able to get it right. 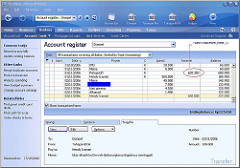 A typical view for any account register. This is for a checking account. But all other account types look roughly the same. The transactions and the displayed columns differ, of course. 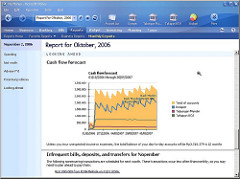 This is actually a relatively long report, showing you many things you may want to know about your financial during that month. Quite nice, and I’ll have 3 million rupiahs after 12 months?!?! Come on, am I really that poor?! 🙁

Net Worth Over Time 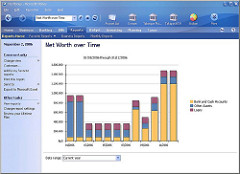 This shows your overall “richness”. Hey, I’m much richer now than any previous time during this year. That means I’m in good shape. 😉

Income and Spending Over Time

This is one way to control your budget, besides the buggy Budget feature (more on this later). It shows you how much you spend and how much you earn. You should automatically know that you want more earnings than spendings. Doesn’t seem to always be the case for me, does it? Hehehe… For people like Ollie, though, I’m sure her blue (spending) bars are waaaay higher than her yellow (income) bars… Bwahahahaha!!! 😛

As I start playing with the features, the Budget feature is what interests me the most. It has a new model, so-called Savings & Spendings. This is because the budgeting feature in Money 2004 was buggy, there are transactions that shouldn’t show up on the budget that incorrectly shows, and duplicate transactions, very frustrating. I was expecting Money 2007’s budgeting feature to be better, or at least not so buggy. Was I ever been more wrong: 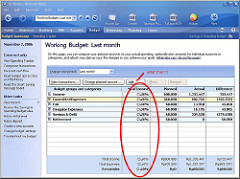 This rendered the Budget feature of Money 2007 almost completely (?) useless. I’ll definitely try Quicken 2007 if I can import my data into that (supposedly better) program.

I haven’t had time to play yet with the “Business” side of Money 2007 Home & Business, I’m not sure if I’m gonna need it. I don’t even know what “accounts-receivable” means.

Money 2007 seems to be very good. If at least it works the way Money 2004 works, then it’s good, since I’ve been using that one for a long time. The buggy Budget feature though, may really disappoint you, as it clearly disappointed me. If you’re new to financial software, I suggest you go to Quicken 2007 (they definitely owe me a dollar for referring you to their product), even though I haven’t tried it myself (but I will be, definitely). Use Money 2007 only if you need to upgrade from previous Money versions, as Quicken 2007 hasn’t yet (and their employee says, will never) have a convenient upgrade path from Microsoft Money (yes, that’s official, try reading their FAQ). While on the contrary, Money offers “Import Quicken…” directly in its menu. Some companies are funny.

UPDATE: You want to know what I use now? GnuCash, an open source accounting software, running on Ubuntu, an open source operating system. I’ve described Ubuntu before, I hope I can write about GnuCash someday.

Joel Comm has shared a very interesting Google Buzz Report for free! There are a lot of options if you want to grow your online business with social media marketing, and Google Buzz is clearly an important opportunity. Simply free, no strings attached. Download it here: Free Google Buzz Report Facebook, Twitter, YouTube, LinkedIn and…

Richard Taflinger, professor at the Edward R. Murrow School of Communication at Washington State University, says that a ploy often used in advertising (marketing) is the use of logical fallacies. These fallacies are not recommended because they may alienate your audience.  Taflinger suggest avoiding the following logical fallacies: Black/White Fallacy / False Dilemma: The black/white,…

OCaml seems to be a (yet another) very interesting programming tool. Objective Caml (OCaml) is the main implementation of Caml (Categorical Abstract Machine Language), which is based on ML. The Meta-Language (ML) was originally developed at Edinburgh University in the 1970’s as a language designed to efficiently represent other languages. The language was pioneered by…

Ever heard of the Raelian religion? For those of you who don’t know, the Raelians are an organization — some would say “alien sex cult” — that believes in scientific creationism — that “aliens” came to this planet and manipulated primitive DNA in order to create humans. In 1973, French journalist Claude Vorilhon (who now…