EC2 is a new server clustering services by Amazon. The difference between traditional servers it’s that this is very on-demand and automated. You won’t need to phone call an admin and “hey, we need a server” anymore, all you have to do is click “launch” and you’ve got a server running. (and the billing starts too, hehhee…) 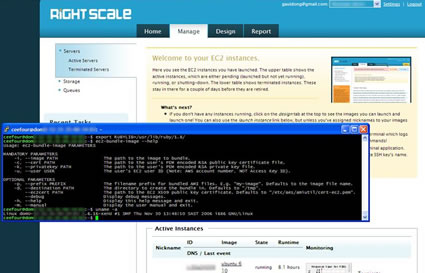 This is indeed a brand new technology that I haven’t heard other competitor yet. (Besides, when you’re competing with a company called Amazon, well……) It allows developers to create a server in less than a few minutes… and disband them at will as well. It’s even quicker than installing Linux in your own computer. 🙂

Amazon started as online book store, but now it’s grown to be one of the strongest Internet companies. 🙂 They built AWS / Amazon Web Services to provide hosted services. S3 and EC2 is among the most popular AWS services. S3 is a (massive) data hosting / storage service. And EC2 is hosting service. These are mostly interesting for developers, not end-users.

EC2 is similar to semi-dedicated / VPS (virtual private server) hosting services out there, with significant difference:

EC2 is controlled using programmable Web Services API. RightScale is the web-based front-end UI that can be used by “mere mortals”, it hides the API complexity.

EC2 servers can be anything you like (web/database/Java/etc.). (Presumably as long as you use Linux?). They’re hosted on Amazon so it fits well if you want a remotely hosted server. It’s more convenient in some ways since you’re free-ed from managing the little details (such as when hardware burns out, memory/hard disk crash, etc. they handle it for you) but you still retain complete access to the server (since you’ll be logging in as ‘root’ user, you can basically do anything there).

Thank you Orbitz for posting [Erlang vs.] Java and and Threads (Jetty): The basic idea is, instead of using 1 thread per connection, since connections can last awhile, they use 1 thread per request that a connection has. The hope being, a connection will idle most of the time and only send requests once in…

Parama W. Danoesubroto, a friend of mine, recently shared a bit of his vast business-savviness. It’s great enough that I’d like to share it here, both with my future self and with you the cool person (yes! YOU) who read this blog. Extra-gladly he’s willing to license his ideas as Creative Commons (oh so geeky!)….

Life is beautiful. Especially beautiful when you see life from the eyes of a sinful. Like me. Overheard: “Many lessons are learned only after the fact…”

I just found a very nicely packed with useful information site for Ubuntu called Ubuntu Tutorials, created by Christer Edwards. Among the top Ubuntu tutorials he posted include:* News Off Topic : Go See Michael Moore’s “SiCKO” (31 Comments) How To Configure Wireless on a MacBook Using Ndiswrapper (24 Comments) How to install & play…