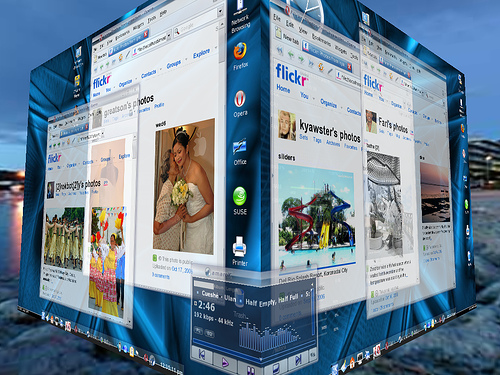 Ubuntu’s latest version 8.10 Intrepid Ibex has just been released a few minutes ago!

Congratulations to Canonical team for releasing this fresh new Ubuntu!

The Ubuntu team is pleased to announce Ubuntu 8.10 Desktop and Server,
continuing Ubuntu’s tradition of integrating the latest and greatest open
source technologies into a high-quality, easy-to-use Linux distribution.

Read more about the features of Ubuntu 8.10 in the following press releases:

Ubuntu 8.10 will be supported for 18 months on both desktops and servers.
Users requiring a longer support lifetime may choose to continue using
Ubuntu 8.04 LTS rather than upgrading to or installing 8.10.

Ubuntu 8.10 is also the basis for new 8.10 releases of Kubuntu, Xubuntu, and
UbuntuStudio:

Because Ubuntu 8.04 LTS is a long-term support release, users of that
release will not be offered an automatic upgrade to 8.10 via Update Manager.
For instructions on upgrading to Ubuntu 8.10, see:

As always, upgrades to the latest version of Ubuntu are entirely free of
charge.

We recommend that all users read the release notes, which document
caveats and workarounds for known issues.  They are available at:

Find out what’s new in this release with a graphical overview:

If you have a question, or if you think you may have found a bug but
aren’t sure, try asking on the #ubuntu IRC channel, on the Ubuntu Users
mailing list, or on the Ubuntu forums:

If you would like to help shape Ubuntu, take a look at the list of ways
you can participate at:

Ubuntu is a full-featured Linux distribution for desktops, laptops, and
servers, with a fast and easy install and regular releases.  A
tightly-integrated selection of excellent applications is included, and
an incredible variety of add-on software is just a few clicks away.

Professional technical support is available from Canonical Limited and
hundreds of other companies around the world.  For more information about
support, visit:

You can find out more about Ubuntu and about this release on our website:

I just completed listening to John C. Maxwell‘s audiobook Good Leaders Ask Great Questions on Audible and I have to say it was awesome. I need to listen to that again, at least on second time. And I will probably re-listen to it again at particular times. His writing (or rather, his narration) contained a…

I’ve been wondering for the past 2-3 years whether my experience, which was diagnosed by my psychiatric doctor, Dr. Kabul Budianto, as affective schizophrenia, were simply that (psychotic state, delusions, etc.) or there’s more to it… spiritually? I’ve also been increasingly thinking that these guys “don’t know nothing” about my condition. Be them doctors, Ph.D.’s,…

Thank you Orbitz for posting [Erlang vs.] Java and and Threads (Jetty): The basic idea is, instead of using 1 thread per connection, since connections can last awhile, they use 1 thread per request that a connection has. The hope being, a connection will idle most of the time and only send requests once in…