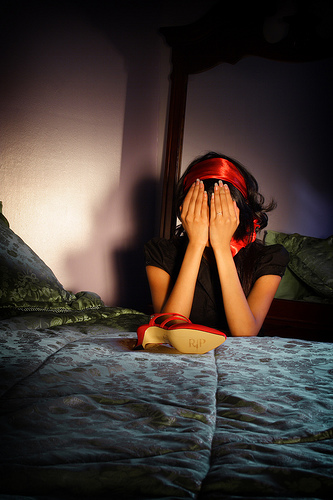 SacredLearning.org is an Islamic web site Parama Danoesubroto recently shared with me which, among other useful materials, contains general talks by Shaykh Husain Abdul Sattar (as freely downloadable audios).

Parama initially made me interested with a talk titled “Wisdom of Wealth” which is excellent.

I begin to listen to the other talks. Actually I dutifully enjoy his talks that my laptop is continuously downloading all of the rest of the talks (including the right-on-time Ramadan classroom) using my trusty DownThemAll. 😉

And then I struck gold, in Muraqabah – Step by Step Approach:

… Ya Allah, You made the night so short. If You’ve made it longer, I would’ve been able to spend more time worshipping You …

It clicked. In Dedi’s words, I definitely ‘blinked…’

To make a long story short, it directly connects to what I felt in a couple of disastrous (but mysteriously uplifting!) events a few of years ago. Not many people will find that passage special, if at all. (Much like the words “Sabar dan Ikhlas, itu adalah Islam” in Ayat-ayat Cinta movie.)

How could a self-proclaimed secular guy like me would even think in the ways of “more time worshipping God?” Well a few years ago, it wasn’t my thinking. It was my feeling, and clearer than crystal at that. A glimpse of Allah would make me burst into tears instantly (that I was thinking it’d be easy for me to get a melancholic role in Hollywood.)

Let alone Allah, a tiny drop of tea or a single piece of rice, as sample reflections of Allah’s “nikmat” did literally make my heart tremble… almost uncontrollably.

“…you get to that state; that perception and that attachment becomes more valuable than anything to you in the world… And when you do something that derails you from that, and you lose that, it would be so disgusting to you…”

To date, this is the best explanation I ever heard about what I felt…

Is it just my illusion of a simply psychiatric mental state? It would be much easier for me to think that way, but too many things are just “too right” (if there is that word.)

But even if things are too right, as I said I was (and OMG still am) highly secular, which means highly unlikely to have anything to do with, err…  muraqaba. Wouldn’t you think?

Hopefully soon things will unfold in the best way for me… Amin.

You heard me. It’s official, starting from yesterday I got no Internet access. 🙁 Restricting Internet access to me is like forbidding me to read books. Unacceptable employer behavior. Sure, there are downsides of unrestricted Internet access. Especially if used irresponsibly or abused. In my case, though, I think the damage for restricting me far…

I’ve been wondering for the past 2-3 years whether my experience, which was diagnosed by my psychiatric doctor, Dr. Kabul Budianto, as affective schizophrenia, were simply that (psychotic state, delusions, etc.) or there’s more to it… spiritually? I’ve also been increasingly thinking that these guys “don’t know nothing” about my condition. Be them doctors, Ph.D.’s,…