UPDATE: The terrorist killed turned out not to be Noordin Moh Top, but Ritz Ibrohim. 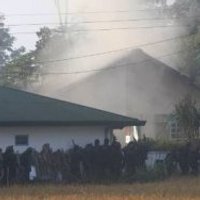 Sources say they have been able to win the gunfight against the hiding terrorists. The breaking news is currently being reported live on all Indonesian national TVs.

During the raid that lasts more than 17 hours with almost constant gunfire, the Malaysian-born Noordin Mohamed Top bomb terrorist were being pushed back to the toilet and underground sewers before finally killed by a bomb launched by Densus 88 policemen.

It is not yet known if there are any other captured terrorist members.