KDE 4.0 contains lots of applications for every day use as well as for specific purposes and is an innovative Free Software desktop, which is usually dubbed as the biggest competitor of GNOME Desktop Environment. Plasma, the new desktop shell developed for KDE 4, provides an intuitive user interface to interact with the desktop and applications. Konqueror is a usable web browser which integrates the web with the desktop. It has the new Dolphin file manager (replaces previous Konqueror in KDE 3), the Okular document reader (to read Adobe Acrobat/PDF files as well as many other file types) and the System Settings control center to complete the basic desktop set.

The KDE Libraries on which KDE is built on, provide easy access to resources on the network by means of KIO and advanced visual capabilities through Qt4. Other parts of the KDE Libraries, such as Phonon and Solid, add a multimedia framework (sound, video, DVD/movie playback, etc.) and better hardware integration to all KDE applications.

Having been on development for a very long time (can’t remember how long!), much to my surprise (or unknowing), KDE 4.0 has been released:

The KDE 4 Desktop has gained some major new capabilities. The Plasma desktop shell offers a new desktop interface, including panel, menu and widgets on the desktop as well as a dashboard function. KWin, the KDE Window manager, now supports advanced graphical effects to ease interaction with your windows.

Lots of KDE Applications have seen improvements as well. Visual updates through vector-based artwork, changes in the underlying libraries, user interface enhancements, new features, even new applications — you name it, KDE 4.0 has it. Okular, the new document viewer and Dolphin, the new file manager are only two applications that leverage KDE 4.0’s new technologies.

The Oxygen Artwork team provides a breath of fresh air on the desktop. Nearly all the user-visible parts of the KDE desktop and applications have been given a facelift. Beauty and consistency are two of the basic concepts behind Oxygen.

Check out the cool KDE 4.0 screenshots: 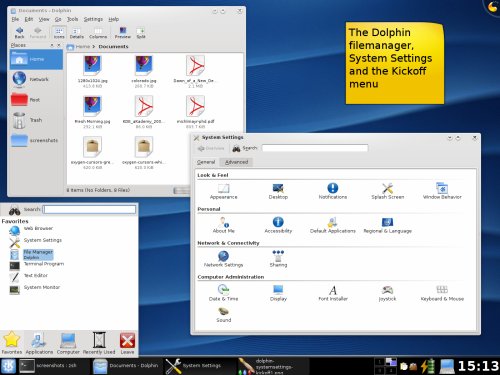 I’m not sure if I’m overly impressed with the default theme especially the visual style of desktop controls (Hint: I’m not), however I’m sure there’d be more beautiful KDE 4 themes sprouting up in (hopefully) not very long time.

Overheard from Assaf: … every once in a while, we need to step back, forget all that we believe is true, and look at the situation with a fresh eye and an open mind. To judge that which is true now. Although in the original context Assaf was talking about Java. I think, seriously, this…