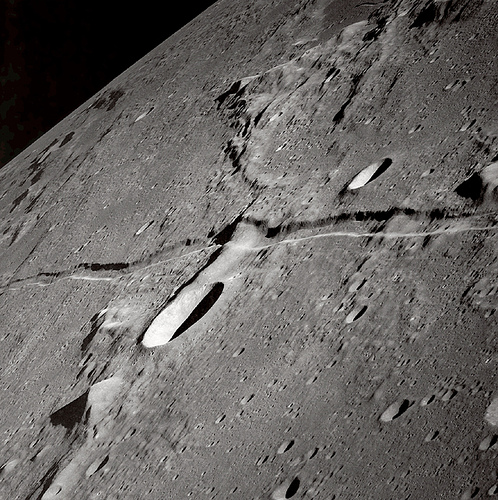 Let me begin by a scientific discovery, a few decades ago: (as pictured above)

A Lunar Rille
Credit: Apollo 10, NASA Explanation: What could cause a long indentation on the Moon? First discovered over 200 years ago with a small telescope, rilles (rhymes with pills) appear all over the Moon. Three types of rilles are now recognized: sinuous rilles, which have many meandering curves, arcuate rilles which form sweeping arcs, and straight rilles, like Ariadaeus Rille pictured above. Long rilles such as Ariadaeus Rille extend for hundreds of kilometers. Sinuous rilles are now thought to be remnants of ancient lava flows, but the origins of arcuate and linear rilles are still a topic of research. The above linear rille was photographed by the Apollo 10 crew in 1969 during their historic approach to only 14-kilometers above the lunar surface. Two months later, Apollo 11, incorporating much knowledge gained from Apollo 10, landed on the Moon.

Can you see a connection with a Wikipedia biography about King Cheraman Perumal? (emphasis mine)

Cheraman Perumal asked them what is this Islam which can so radically change the conduct of Arab thugs (who were so feared in Kerala that when an Arab ship downed anchor in port, people hid their women and buried their treasure) to so decent a nature that the populace was attracted to their trade and religion. The Arabs then described the tenets of Islam and talked about their Prophet. The king then wanted to know if there was any proof that this person is indeed a Prophet. The traders described the Mujizaat (supernatural deeds) of the Prophet, including the Shaqq Al Qamar or the Splitting of the moon into two.

Cheraman Perumal then summoned his Hindu Astrologers who consulted their almanacs and reported a similar phenomenon recorded by them. The King forthwith abdicated his throne and left with Malik Bin Deenar for Arabia where it is chronicled that he met the Prophet Muhammad, accepted Islam and performed the famous Last Hajj with him. On his journey back, he was drowned in a tempest which destroyed his ship and his body came ashore at Salalah, Oman where his grave is a famous landmark today.

The above is confirmed by Muhammad Hamidullah‘s book, titled “Muhammad Rasulullah: A concise survey of the life and work of the founder of Islam” (1979), quoted:

There is a very old tradition in Malabar, South-West Coast of India, that Chakrawati Farmas, one of their kings, had observed the splitting of the moon, the celebrated miracle of the Holy Prophet at Mecca, and learning on inquiry that there was a prediction of the coming of a Messenger of God from Arabia (Detail given bellow), he appointed his son as regent and set out to meet him. He embraced Islam at the hand of the Prophet, and when returning home, at the direction of the Prophet, died at the port of Zafar, Yemen, where the tomb of the “Indian king” was piously visited for many centuries.

Note: Chakrawati Farmas and Cheraman Perumal are the same person.

Finally, can you see again, the connection with one of Islamic teachings, written directly in the Holy Quran?

Did The Prophet Muhammad split the moon as a miracle?

In the name of God, the Merciful, the Compassionate

The Hour has approached, and the moon split. But whenever they see a sign, they turn away and say, ‘This is evident magic.’ (54:1-2)

The miracle of the splitting of the moon was demonstrated before a certain gathering who persisted in denial of Muhammad’s Prophethood. As was related by ‘Adbullah ibn Mas‘ud, while they were in Mina’ one night, the Prophet split the moon into two by a gesture of his index finger. The halves of the moon appeared one behind the mountain and the other in front of it. Then, the Prophet turned to us and said: ‘Be witnesses!’

Watch a video here. But with disclaimer.

All that’s left is your faith.

P.P.S. Beware, do not believe nor disbelieve a hypotheses unless there is scientific and/or logical explanation that makes sure it is truth or lie. Until then, just leave it as a mystery. 😉 For faith though, it’s entirely up to you, just consider the consequences.

Overheard from Assaf: … every once in a while, we need to step back, forget all that we believe is true, and look at the situation with a fresh eye and an open mind. To judge that which is true now. Although in the original context Assaf was talking about Java. I think, seriously, this…

Emotional Freedom Techniques (EFT) is based on a new discovery that has provided thousands with relief from pain, diseases and emotional issues. Simply stated, it is an emotional version of acupuncture except needles aren’t necessary. Instead, you stimulate well established energy meridian points on your body by tapping on them with your fingertips. The process…

I was just reading A Cost Analysis of Windows Vista Content Protection, written by Peter Gutmann, referred by Bad Vista. A pre-disclaimer: I’m not really “at war” with Microsoft, as I have some friends at Microsoft, and even I’m myself a .NET Blogger. In short, it describes how the content protection features incorporated in Microsoft’s…

GwenView is a very good image viewer for Linux. It loads quickly, has a nice user interface, and has most of the more useful features of ACDSee. Among the features it provides are: full screen, preview, thumbnail view with details, and loads of image effects (sepia, blur, and the like). It’s definitely sufficient for any…