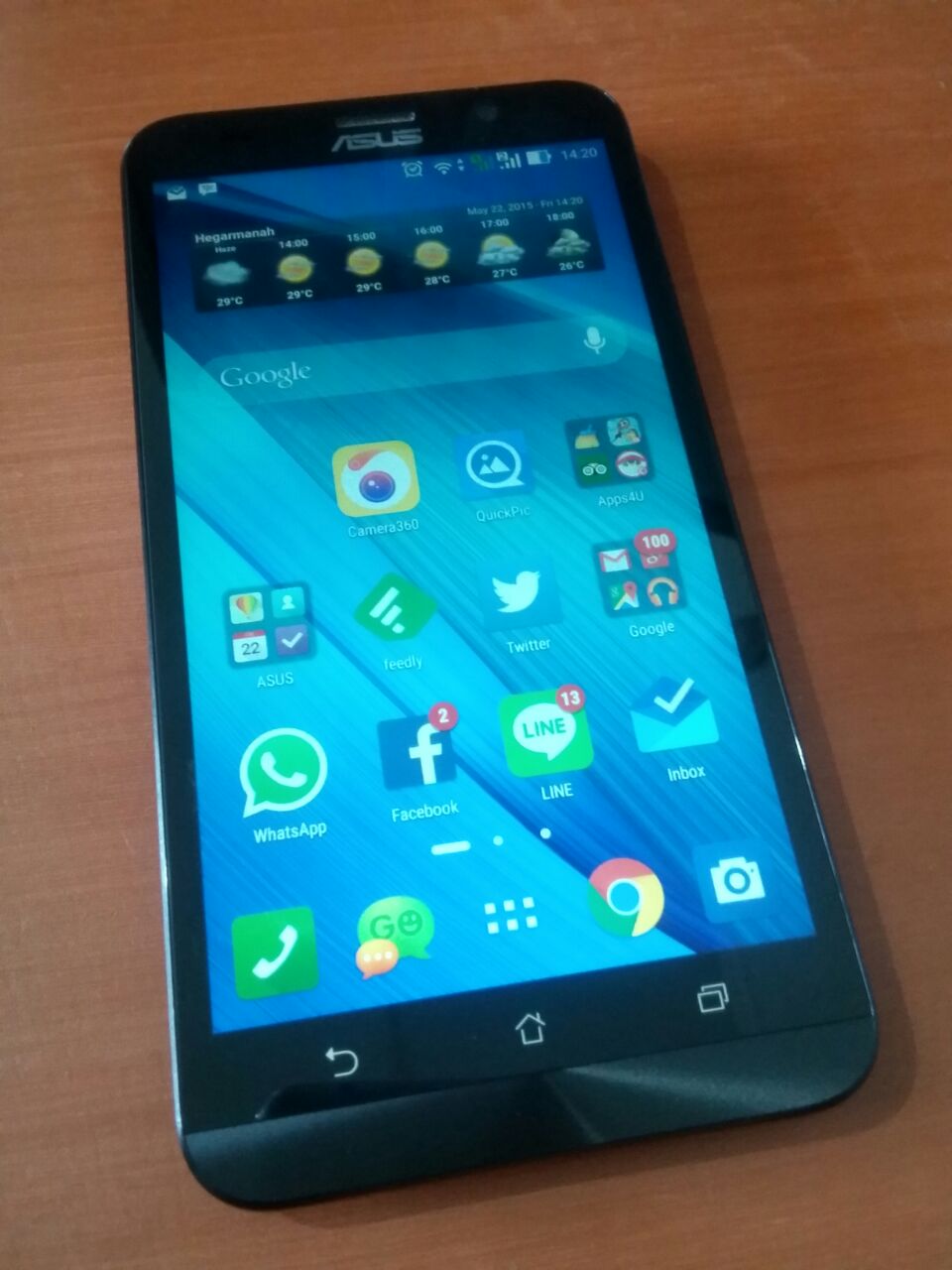 Actually I never planned to buy a new smartphone, at least not so soon. But since my previous Samsung Galaxy Note 2 suddenly stopped working, unfortunately I had to find a replacement quickly and after a light research, I decided to buy an ASUS Zenfone 2. So I went to Bandung Electronic Center (BEC) last week.

After a bit of windowshopping, some stores didn’t have exactly the variant I was looking for, or had it but not the color I want. All stores only sell the silver and red variant. I almost settled on the 4GB/32GB/2.3GHz/distributor-warranty version priced at IDR 3,300,000 but then the storekeeper said they had the wrong price and it’s actually IDR 3,350,000 so I was upset and then I found another store which sold the Red/4GB/32GB/2.3GHz/official-warranty version at IDR 3,250,000 which I purchased. The official warranty is from Metrodata. I’m quite happy, although this is a very expensive phone for me, it’s still cheaper than when I bought my Samsung Galaxy Note 2 phone last year in used condition for IDR 4.300.000! :p

Front looks with display on and off: 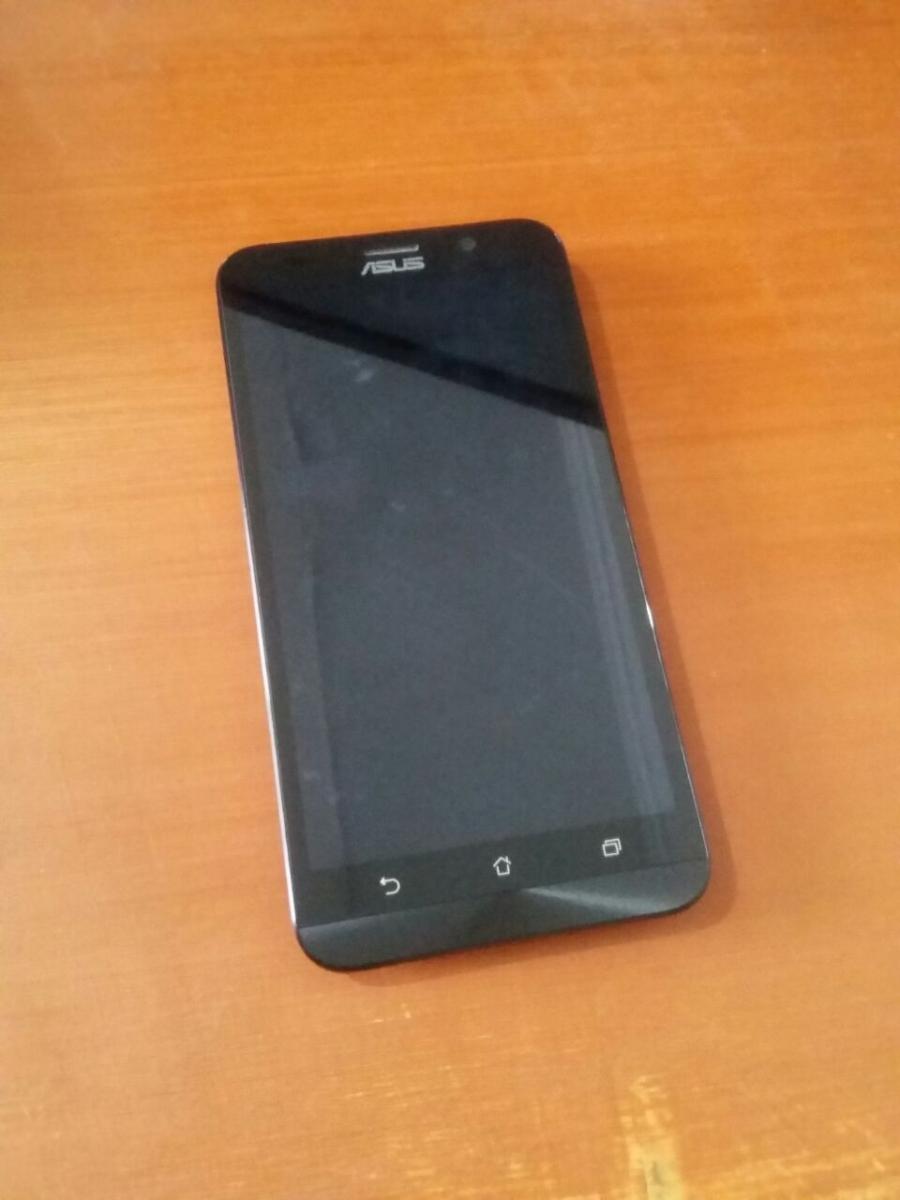 Looks great on back, with LED flash, F2.0 13 MP camera, and volume buttons: 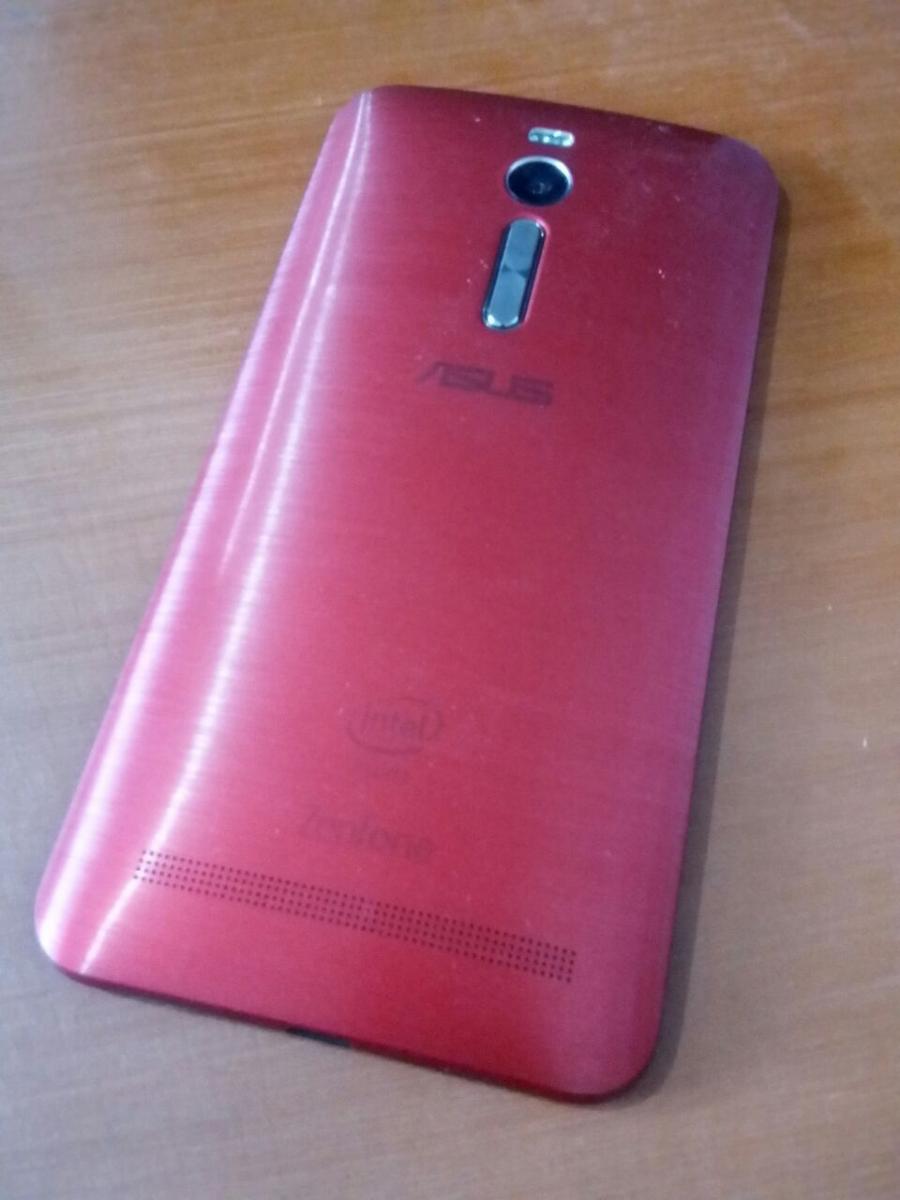 Bottom is for microUSB port and microphone: 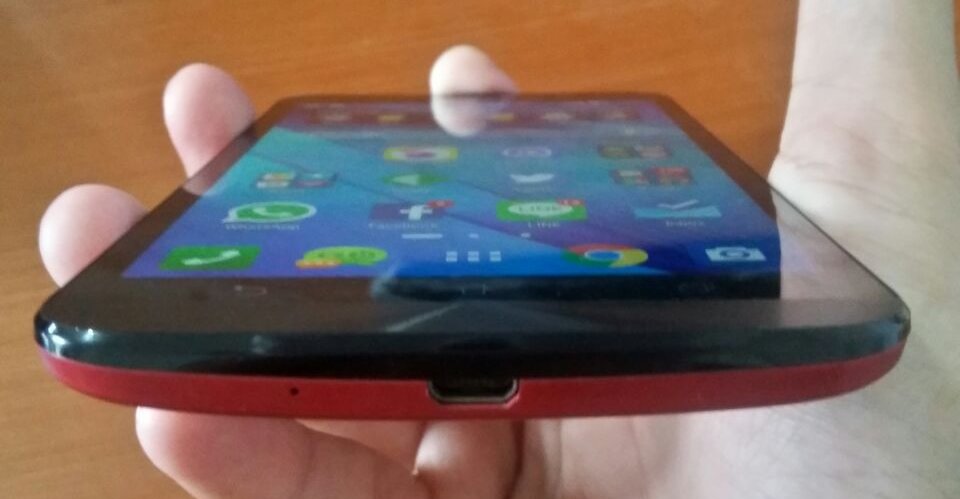 Top is for power button and 3.5mm headset jack: 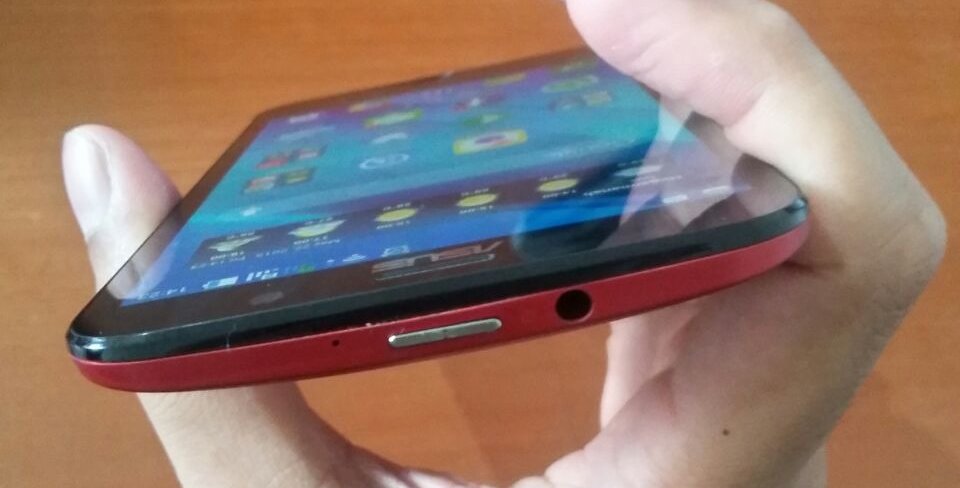 Sides dont’ have any buttons at all:

My problem with the back design is that it is too rounded, so if I put the phone on back, it will wiggle because the back side is rounded and not flat. 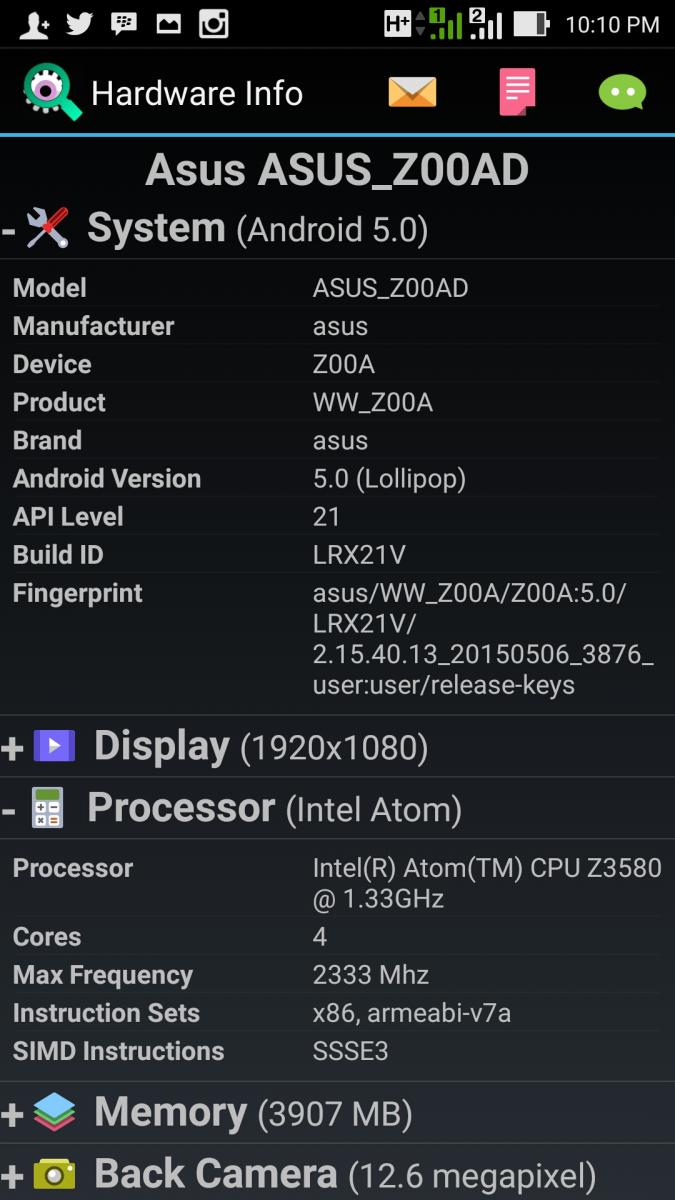 After I installed all my applications, in most cases the phone performs “quite good”. Why I said that is because my expectations are actually higher. This is a flagship 4 GB RAM phone with the latest quad-core Intel Atom processor, I don’t accept any sluggishness. It’s by no means sluggish, but there are a few times where it does stutter a bit, even while playing music it can stop the music for a few milliseconds, which is quite annoying. Camera processing is also not instantaneous, especially when I turn on Beautification or any other effect. Adobe Photoshop is the worst offender, applying an effect can take 5-10 seconds. That said, other phones with lower specs are definitely worse, hehe 😉

Battery is 3,000 mAh and my verdict is… so-so. It lasts around 9 hours with my moderate usage (no video playing, just social media, chatting and browsing) with screen brightness to lowest-auto. I’m quite worried because this is a 1-week old phone. Within 1 year of usage I expect that I will have to disable many background apps to make it survive longer.

Battery screen gives estimated time left, I don’t really trust it. :-p Especially after 30% it drops faster than above 30%. But below 20% ZenUI will ask if you want to go Ultra-Power-Save mode which disables most background notifications, a must-have convenience that also exists in Samsung and perhaps other brands. 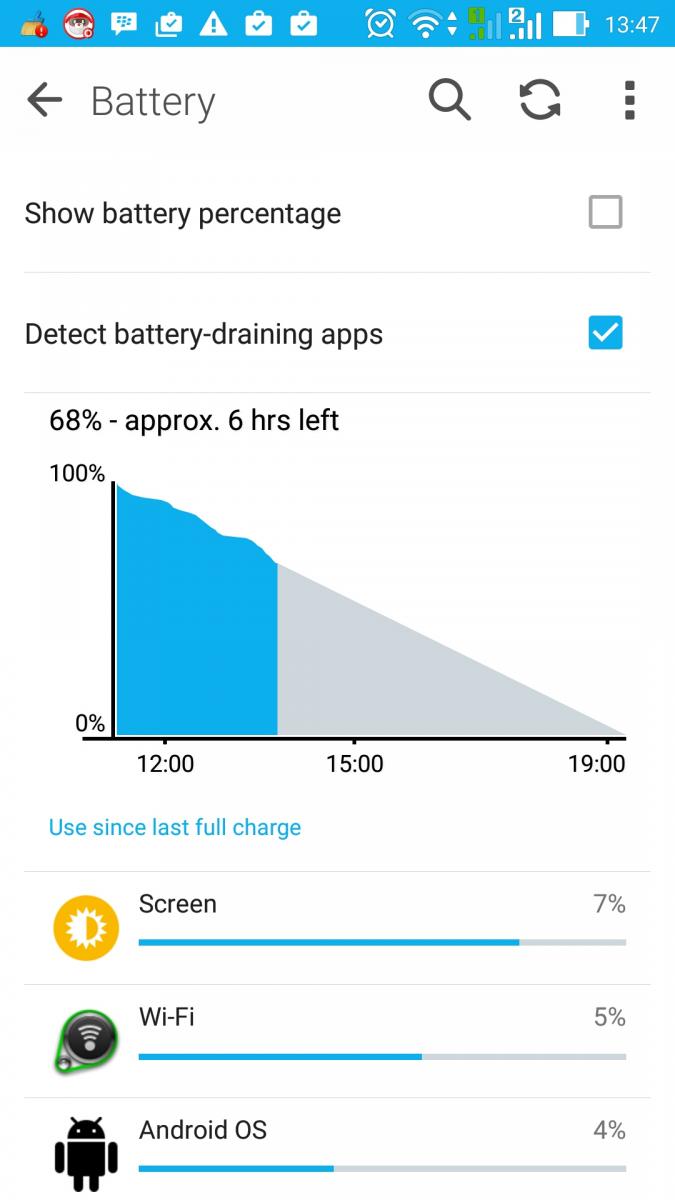 The great thing is it supports Quick Charging and the estimate is quite accurate. From 5% to full charge it requires about 1 hour. 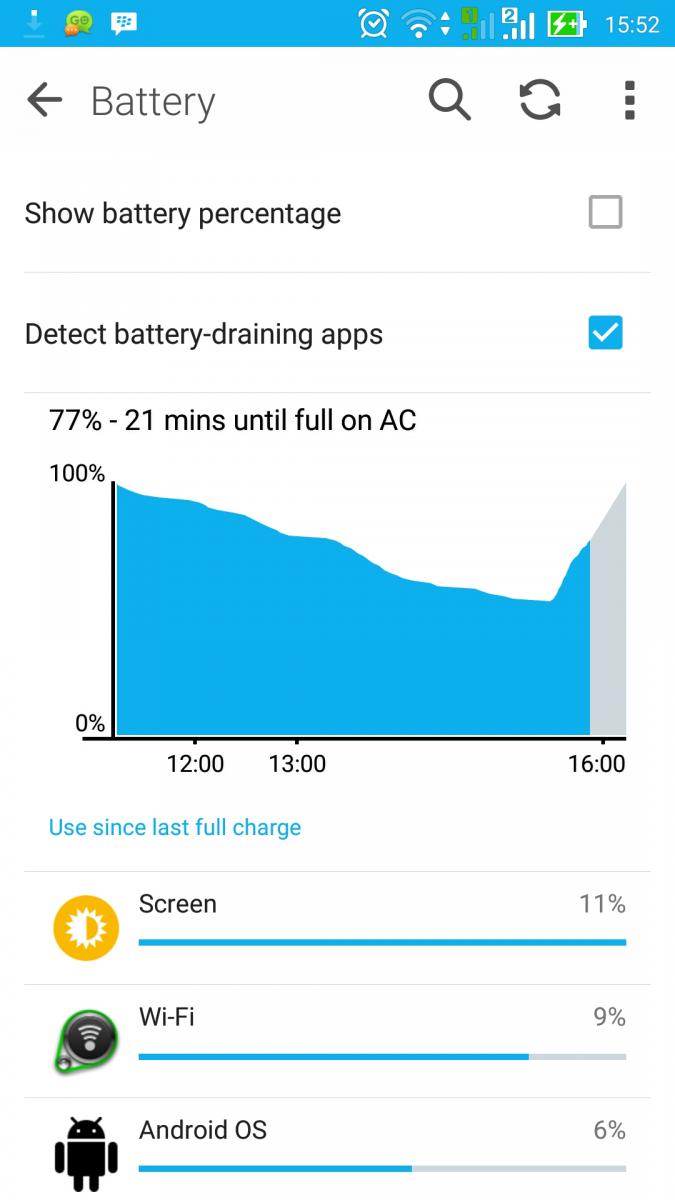 The good thing is, ASUS provides Auto-start Manager so I can disable background apps that I don’t use often. I can live if these apps don’t always update in real-time. 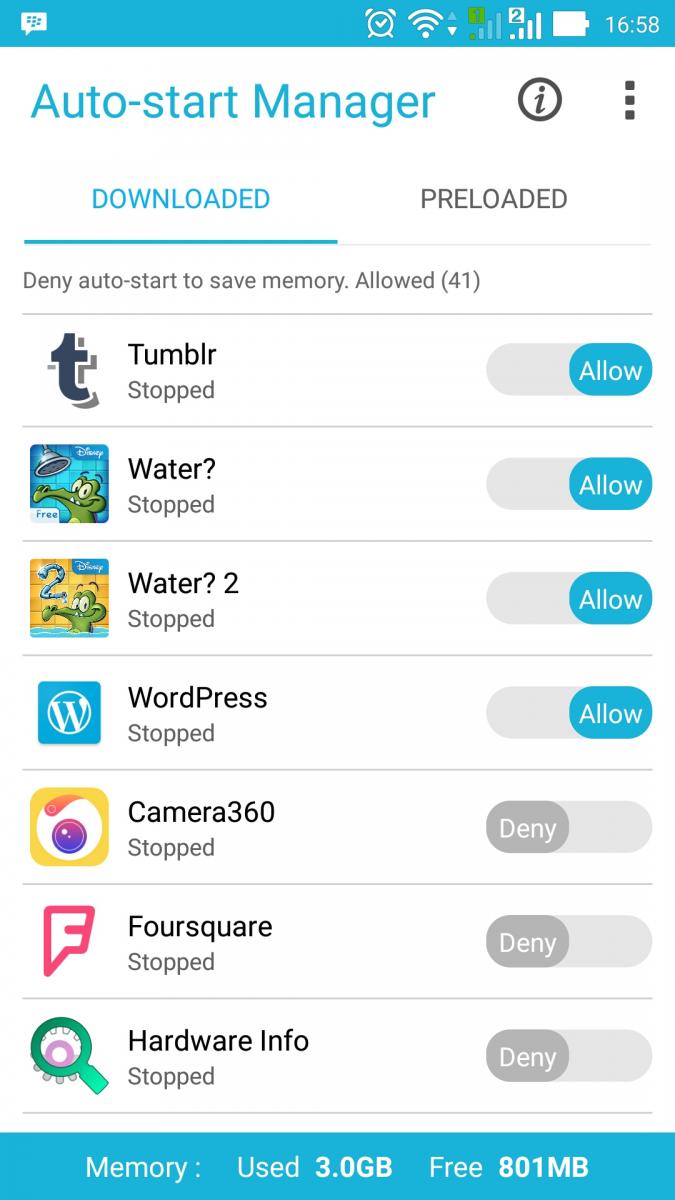 About temperature, in most light usage this phone is quite cool. However during (rapid) charging, it will get very hot. Also it gets quite hot during phone calls. And when connected to WiFi with heavy access, it does get quite hot. It’s probably because of the 2.3 GHz processor getting to max speed. But so far, it’s understandable.

The ASUS ZenUI user interface is beautiful, convenient, and fast. I love it. Here we have the standard Android Lollipop notification tray: ASUS also provides quick access buttons to brightness (can be auto with slider) and other functionality, including the Splendid display setting which can change screen color style to warmer reading, or to vivid, etc. Splendid is a cool idea but I don’t really use it, I just leave it at balanced.

ASUS provides CleanMaster (Boost in notification area) preinstalled, which I don’t know yet whether it’s useful or not, but I guess it’s good to know it’s there if I need it and it’s integrated.

ASUS provides many widgets like Weather out-of-the-box, also applications like Do It Later and SuperNote. You may call them bloatware but I think these are nice apps. And for some people these apps are just right and don’t need to install a more complex app.

ASUS also provides ways to customize the look and feel of the UI, home screen, lock screen, although for this I have to say Xiaomi’s MIUI is best. ASUS ZenUI themes are much fewer. The nicest thing I found is ASUS live wallpapers, which ASUS claims are battery-friendly, here I use LiveOcean live wallpaper. The ocean water level reflects the battery level, so it’s pretty neat too.

My hope now is that this phone can perform well and reliable for at least the next 3 years. I did read stories from my friends that had Asus mobile devices broken after some usage and still troublesome even after warranty repairs. I hope mine will do much better. Aamin.

Ubuntu’s latest version 8.10 Intrepid Ibex has just been released a few minutes ago! Congratulations to Canonical team for releasing this fresh new Ubuntu! The Ubuntu team is pleased to announce Ubuntu 8.10 Desktop and Server, continuing Ubuntu’s tradition of integrating the latest and greatest open source technologies into a high-quality, easy-to-use Linux distribution. Read…

Hyper’s CD Catalogizer (short name: cdcat) is a GUI disk cataloging application. It can catalog CDs, DVDs, and other removable storage files, and also regular directories and files including your downloads. It is using the Qt toolkit so it probably look best on KDE, but it works perfectly on GNOME. The user interface is pretty…

After much desperation and frustration (for some undisclosed reason), finally I got hold of Microsoft Money 2007, Home & Business Edition. This is because the financial software I was currently using was Microsoft Money 2004 Deluxe, I guess an upgrade after 3 years will be great. Or so it seems… Installation was… very quick, despite…

Recently I’ve had a conversation with my good friend Aulia Halimatussadiah. One of what we talked was about our financial management. She said her financial was horrible (she earned enough but spent lots more, hehehe). So I suggested her to use the software I’m currently using, Microsoft Money (I’m currently using Money 2004). It turns…

As discussed on Quicken forums, I’ve tried it myself that Quicken 2007 does not have support for importing Microsoft Money data at all (I have Money 2004 Deluxe which I recently upgraded to Money 2007 Home & Business). There is still a possibility that I’ll be able to get Quicken 2007 working with my financial…