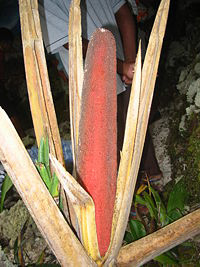 Have you ever heard of Papua Red Fruit or what Indonesians natively called Buah Merah Papua?

This rare fruit has recently been gaining significant momentum as it’s claimed researched to have the ability to cure HIV/AIDS, cancer, and other diseases:

It’s a natural fruit grown in the deep of the Irian Jungle. Red Fruit, the natural HIV Aids and alternative cancer treatment of Papua Indonesia, was never been initially realized as Cancer and HIV Aids Cure. It has been laboratory search that its ability to cure HIV Aids as well as cancer and any diseases is caused by its rich contents of tokoferol and betakaroten, as both are anti-oxidant which able to increase the body’s immune. Tokoferol and betakaroten are combined to dispatch amino acid which is needed by HIV. Thus the virus can not maintain live (Full Lab report).

There have been testimonials about this fruit’s wonderful results:

He was then took Augustina (who -by HIV Test – already shown thick HIV symptom) into HIV/Aids treatment by feed her with the Red Fruit Oil regularly – three times a day.Since then, Agustina started getting better. Her HIV/Aids cured, HIV Test shown the early hiv symptom gradually fade away. Her condition was gradually recovered. She started to gain weight from previously 27 kg and reach 46 kg gradually. Her bad diarrhea and anal infection as well as other early HIV symptom disappear. Her skin improved, her hair start to grow, and her condition was getting better and able to perform her daily activity.

What is Inside Papua Red Fruit?

Carotenoid, according to Wikipedia, are “organic pigments that are naturally occurring in plants and some other photosynthetic organisms like algae, some types of fungus and some bacteria.” People with high beta-carotene intake and high plasma levels of beta-carotene have a significantly reduced risk of lung cancer.

Tocoferol (Tocopherol) is simply Vitamin E. According to Wikipedia:

Antioxidants such as vitamin E help protect against the damaging effects of free radicals, which may contribute to the development of chronic diseases such as cancer. Vitamin E also may block the formation of nitrosamines, which are carcinogens formed in the stomach from nitrites consumed in the diet. It also may protect against the development of cancers by enhancing immune function.

And to no surprise, Indonesian people have discovered business ideas for this fruit: selling them at a premium.

There are quite some sites promoting this fruit: Buah-Merah.info, Buah Merah Online, Fruit-Amazing, and even a forum thread.

Not A Replacement for Medical Treatment

Unfortunately, there was also a sad story:

In summary, not long after receiving Red Fruit treatment, Agustina died of lung, mouth and throat infections due to her not receiving conventional medical treatment anymore.

Want to Try It for Yourself?

Fortunately it is easy enough to get Papua Red Fruit in the form of bottled Buah Merah Mix juice. It can help improve your body’s immune system to diseases, so it is healthy to drink it daily even when you’re completely healthy. Prevention is always better.